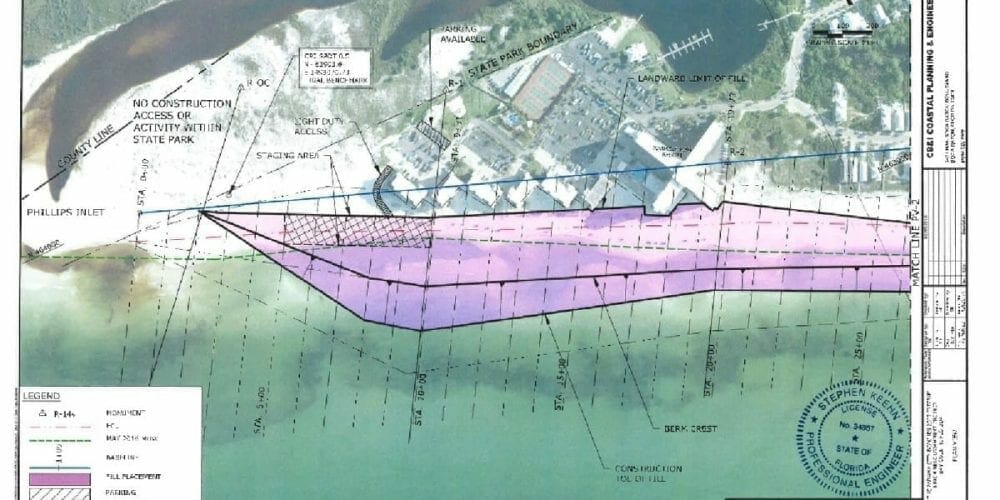 Great news! The dredges will be arriving in Panama City this weekend, and dredging should commence as scheduled by early next week. The updated schedule is below. The durations at each reach have changed somewhat due to the updated volume needs based on the before dredging surveys conducted over the last couple weeks. I still must caveat the schedule by saying that weather/equipment delays may cause changes at any time.

And, again, here is the project website. The maps/schedule have not yet been updated with the above info.

Q: Where is this project taking place?

Q: How much is this project costing? And who is paying for it?

The construction cost for the repair project is approved up to $17.8 million (if all options/allowances are exercised), although the base bid is $14.1 million, and it is entirely locally-funded. The local cost-share is provided by the “Third Cent” Bed Tax, an additional one cent bed tax that began being collected in 1997. This beach renourishment fund has ample dollars available for this project. In addition, the Bay County TDC has applied for $4.5 million in State of Florida Beach Management Funding Assistance Program funding. If not secured this year, the Bay County TDC will have two more years to re-apply under this grant program for reimbursement of the state cost-share (approximately 30%).

Q: How long will this project take to construct?

The project is expected to take approximately two months, however construction may move faster or slower. There may also be circumstances that cause lengthy delays due to construction shutdown, like weather conditions or major repairs to equipment, so please keep checking the Construction Schedule.

Q: What is the project schedule?

Q: Who is managing this project?

Q: Who is the dredging contractor?

Weeks Marine is the dredging contractor. They also constructed the 2005-2006 beach nourishment project, which was managed and partially federally-funded by the US Army Corps of Engineers.

Q: Where is the sand coming from that is being placed on the beach?

The sand for large-scale beach nourishment projects such as this come from our permitted, offshore “borrow areas.” The main borrow area is located approximately 3.5 miles offshore of the Thomas Drive area, with secondary borrow areas near the St. Andrews Bay entrance channel.

Q: How does the sand get to the beach?

The sand is dredged from the offshore borrow areas into a hopper dredge. The hopper dredge motors from the borrow area closer to the project site and hooks up to a submerged pipeline. The submerged pipeline runs from just off the beach up onto the beach and connects to shore pipeline, which runs laterally along the dry beach. The sand is discharged as a water/sand slurry mixture through the pipeline, and bulldozers reshape the sand to meet the designed construction template.

Q: Why does the sand coming out of the pipe look darker than the sand on the beach?

The sand coming out of the pipe is a water/sand mix, and it often contains darker, fine material that wash out as the sand is reshaped on the beach by the bulldozers and dries out over time. This is not contamination. There is a detailed Quality Assurance/Quality Control plan in place that will immediately address any sand quality issues that may arise

Q: How fast does the project move down the beach? How long will it be in front of my property?

Construction should progress at a rate of 500 feet to 1,500 feet per day. Barring any temporary work stoppages, this means the active construction area may only be in front of your property for a couple days. Please be patient. Everyone, including the contractor, engineers, and the Bay County TDC wants the project to continue moving down the beach and closer to completion.

Q: How do I access the beach when construction is occurring in front of my property? How do I get over the dredge pipe?

The active work/construction area is limited to an approximate 1,000-2,000-foot section of beach. Simply walk laterally along the beach until you get around the active work area, locate a sand bridge that goes over the dredge pipe, and you will be able to access the Gulf. The contractor will build these sand bridges over the dredge pipe, which is strung laterally along the shoreline, so that pedestrians may have access to the Gulf.

Q: What are the work hours for construction?

Unless the work temporarily ceases for repair or weather, work will continue 24 hours a day. These are extremely expensive projects, and it is not feasible to halt work overnight or on weekends.

Q: Why is this project important?

The beaches of Panama City Beach that you see today are actually the result of three previous nourishment projects – one completed in 1998/1999, the second in 2005/2006, and the third in 2011. Hurricane Opal (1995) caused significant erosion of the beaches and left very little dry beach along much of the Panama City Beaches. To combat this erosion, as well as erosion from storms since then, renourishment projects have been undertaken. These projects not only provide recreational beach width for the benefit of residents and visitors, but during storm events, the sand also provides critical protection for structures and infrastructure landward of the beach. Because of the 1998/1999 project, there was very little damage to upland development when Hurricane Ivan struck in 2004. In addition, a healthy beach provides nesting areas for species such as sea turtles and shorebirds.

This beach nourishment management program is much like a roadway or other such infrastructure – once it is built, it must be maintained. The work you see ongoing now is a small maintenance project that will help ensure continued use of a sandy beach and storm protection for the upland.

Q: What about sea turtle nesting?

The sea turtle nesting season begins May 1st, when the project is expected to be complete. There are permitted procedures in place if there are construction delays that cause the project to move into May.